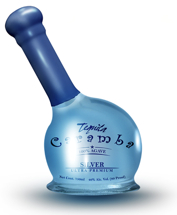 I’m tackling the “sexy” tequila known as Caramba. They call themselves “The Worlds Sexiest Tequila” and that made me worry a bit, initially, as a tequila taster. My main fear with the marketing statement is that they’re selling the tequila with woman’s bodies covered in glitz and glamor. Don’t get me wrong, I don’t mind looking at attractive women but I don’t want it to be the selling point of the brand, I want the taste to sell itself.

In order to provide proof that this 100% agave tequila product can sell itself on taste, I’m going to put the silver to work and see what I can find in its taste profile. First, it’s clear, as clear as a silver should be and we’ve got that out of the way up front. Secondly, how does it work on the nose? The scents are very sweet with ripe agave notes along many great qualities of a great silver including some pleasant citrus scents and over ripe pineapples.

The tail end of the Caramba Silver’s nose will define this tequila as its own branding: earthy mineral style almost like that of a red wine with terrior. It is as if I’m scooping up the soil from the terrain and bringing it to my nose. Some people may or may not be turned on by this uniqueness but it gives me a great way to characterize the bouquet and learn the tequila.

It’s not a complete review without actually tasting the Caramba Silver, so here we go! First, a warm and smooth texture which is extremely inviting. The thickness is pretty considerable for the age of a silver (almost not aged at all!) and the smoothness makes it more pleasing on the palate.

The soil-profile I found on the nose continues through the sip with a strong terrior finish, perhaps it can also be described as an earthy agave appeal. The initial attack is sweet with subtle hint of caramel followed by a sweet pineapple nectar transition into this earthy finish. Take a quick intake of breath and I feel a ripened pineapple and agave aftertaste. Add some ice to this silver and you’ll pull out even more earthy profile from the nose and taste, almost giving a little black licorice flavoring in the tail end of the taste.

Overall, this tequila has a uniqueness that makes it stand out among other silvers. This unique earthy agave flavoring defines this spirit which could be a turn-on for some and a turn-off for those that like a lighter less flavorful tequila. I’m still unsure if I like the niche Caramba is using to define their tequila, using the “sexiest” as its qualifier. I think the brand’s flavor stands on its own and should be the definition of this spirit and big tequila drinkers may see the marketing message as masking a sub-par tequila. However, in a world being filled with tequila brands everyone has to find some way to get their product in the hands of eager customers and sex does sell.

Cheers From the UK – Have A Beer

Host of Common Man Cocktails with a goal to give new drinkers a less intimidating drink tutorial experience.